Unique melodies and moving lyrics staying always on the course of pure heart and healthy spirit . . . classic songs that could have been scribbled down in dusty travel logs 50 years ago. Similar to Erin McKeown, Randall takes old-time influences and makes modern music.” Northeast Performer Magazine

Deidre Randall’s been on “the edgier side of folk,” as NHPR’s John Walters called her, since she first started playing her songs at open mics around New England twenty years ago.

Since 1998 Deidre has recorded three albums of her original songs; Love on the Loose, Passport and Dig. The third release, Dig, is the culmination of many years of writing, plus two years in the crafting with three producers; Marc McElroy, Guy Capecelatro III and Chris O’Neill, collaborating and guiding Randall along the path. The CD release band includes Marc McElroy, Guy Capecelatro III, Jim Rioux, Adam Kelley and many special guests.

Dig includes ten songs and two poems written, or co-written by Randall. The title track Dig was first heard by moviegoers in 2011, when it was included in the soundtrack for Farming 101, a film on local dairy farms created by Randall’s father, Peter.

Deidre Randall was the Best Folk Artist of 2000 in Seacoast Newspapers, Spotlight Magazine’s Reader’s Choice Awards back in the day. She was twice nominated for Portsmouth Poet Laureate. In 2002, Deidre founded the Writers in the Round performance series, which then became a radio show on Portsmouth Community Radio, and also spawned a creative retreat in 2004, all of which continue to this day. She likes to get artists together and see what happens. Deidre is also the CEO of Peter E. Randall Publisher, an independent publishing house based in Portsmouth, N.H., and in business since 1970. In 2008 she assumed leadership of the company and in 2010 she started an imprint for music related books called Songsmith Books.

Her 3 kids—Kael, Ethan and Ella—are fun, funny and range from college age to first grade. Her husband Dave is a reluctant sound man, with dashing sideburns, and a carpenter, who is trying to finish their GD renovation….

Dig
Passport
Love on the Loose

Putting on a Show?

If you want to have us come play at your event or club, please email Deidre at deidre.randall(at)me.com and let us know the details. We loooove to play! Photos from Deidre's CD release show for Dig are on Facebook. New gigs will be posted on the Facebook page as they are announced. Give us a "like" why don't you? 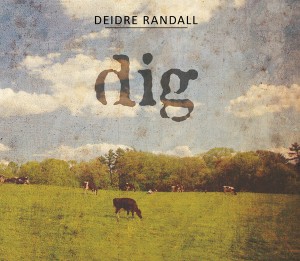